Listen up, Kanye: if you want to turn atheists into believers, I’m here to let you know what it’s going to take. I’ve spent years on both sides of the debate, and while I don’t see myself reconverting anytime soon, I would never say that it’s impossible to convince me there’s a God. If you’d asked me ten years ago if I’d ever call myself an atheist, I’d have said “Heck no!” Clearly, I’m no prophet.

Let’s be honest right from the start: there may only be so much Kanye or any human being can do. If I could be impressed by someone’s profound personal testimony, I’d be baptized dozens of times. If there was a valid and sound logical argument for God’s existence, it would have been presented by now. Apologists think they’ve already done so; atheists like myself think they’re full of it. The fact that this conflict has been ongoing for millennia with no novel arguments forthcoming should make believers question if their logic is really as rock-solid as they think it is.

If apologists can’t do it, then the ball is firmly in God’s court. Being all-powerful, he must have tons of tricks up his proverbial sleeve. His reticence to use them could be the subject of another post, but let’s say he wanted to pull one out for the sake of my eternal soul. Already we have a problem: I would be a bad skeptic if I were made a believer by a single act. Realistically, if I were to experience the kind of mind-boggling, unprecedented gesture that could only be performed by God, my first reaction would be to question the reliability of my own faculties, immediately creating doubt where God intended conviction.

In theory, one could be skeptical about pretty much anything. Go down that rabbit hole too far, and you’ll wind up a solipsist with a headache. Perhaps it would be more charitable to ask not what would convince me outright, but what would make me stop and reconsider. An act of god might not persuade me to join Team Deity, but it could at least give me pause — more than God has done for me so far. I can definitely think of a few things that would force me to take a step back and reevaluate my position:

This is by no means an exhaustive list. God could have methods at his disposal that are beyond my understanding. I mean, using Kanye West as a spokesperson seems like an odd choice to my limited human mind — but then again, having him show up at my door to rap the gospel might be just the kind of miracle I’ve been waiting for. 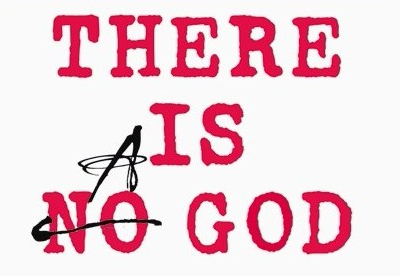 Christians love themselves a good “get.” Whenever a notorious celebrity or outspoken atheist converts to the faith, from Alice Cooper to Jeffery Dahmer, believers point to them as examples of the life-changing power of Christ. Antony Flew is one such name that I’ve seen dropped multiple times in Christian apologetic texts, podcasts, and YouTube videos. Flew was a well-known atheist writer and debater for decades, but his 2007 book There Is a God claims that all it took to become a theist was obeying the Platonic maxim to “follow the argument wherever it leads.” So what arguments were responsible for Flew’s famous change of heart?

Flew is a philosopher by trade, and he understandably views the God question through this lens. However, when it comes to other fields of study, Flew behaves like a child who hasn’t learned to share; he demands these other fields respect the domain of philosophy while simultaneously using philosophy to encroach on those fields.

Early in the book, Flew sets ground rules for scientists who wish to engage in philosophy, declaring that “a scientist who speaks as a philosopher will have to furnish a philosophical case.” This is a fine sentiment on its own, but Flew doesn’t seem to understand when it is appropriate to speak as a scientist and not a philosopher. For instance, Flew does not believe that origin of life questions can be answered by life science:

How can a universe of mindless matter produce beings with intrinsic ends, self-replication capabilities, and “coded chemistry”? Here we are not dealing with biology, but an entirely different category of problem.

This error in categorization leads Flew to to believe we have a “reason for doubting that it is possible to account for existent life-forms in purely materialistic terms”. He goes on to quote a number of scientists who acknowledge (honestly) that we don’t know how life arose on this planet, and concludes that the “only satisfactory explanation” is an intelligent designer. Sometime, despite being a neophyte theist, Flew has already mastered the “science doesn’t know, therefore God” cliché.

Flew employs the same cliché when discussing the idea of the multiverse. Once again, Flew points to the lack of scientific consensus on this issue as support for theism. However, his critique that multiverse theory “explains everything and yet nothing” rings hollow when “God did it” theory has the same shortcoming.

This isn’t the only time Flew demonstrates a knack for classic apologetic mistakes. He masterfully assaults the strawman of the scientist with the atheistic bias, decrying the “dogmatic atheism” of scientists trying to “preserve the non-theistic status quo.” Flew’s collaborator, Roy Abraham Varghese, ups the rhetoric in the book’s first appendix by claiming that “a deliberate refusal to ‘look’ is responsible for atheism of any variety.” Has Varghese never encountered atheists like myself who have searched for God and found nothing?

Flew is happy to quote-mine scientists when they support his views, but he has some basic misunderstandings on key scientific questions. He has bought wholesale into the “monkeys with typewriters will never randomly produce Shakespeare” argument against evolution, ignoring the point that natural selection is not as random as he thinks.

Additionally, several of Flew’s arguments boil down to “laws require a Lawgiver,” a circular argument that cannot be used as evidence for said Lawgiver. Flew frequently uses loaded language to point towards a creator god he has yet to demonstrate. He asks, “Who wrote the laws of the nature?” as if we already know there is a “who” to write them. He claims that “if you accept the fact that there are laws,” you must then ask the question, “What agent (or agents) brings this about?” Once again, when did we establish that there is, in fact, an agent who brings anything about?

Flew then makes a leap in quoting Swinburne to assert a “personal God with the traditional properties” must be said Lawgiver. This is worth noting, because it’s one of the few places in the book where Flew comes off as anything other than a deist. Flew never publicly declared himself a Christian, so if you are a Christian reading this book looking for a dramatic conversion story, you will be disappointed in that regard. Flew does admit that “the Christian religion is the one religion that most clearly deserves to be honored and respected,” but he outsources the heavy apologetic lifting to N.T. Wright in the second appendix.

I finished There Is a God with a base level of respect for Antony Flew. He has, if nothing else, walked the walk while risking his livelihood and academic reputation. I’ve made the same journey, albeit in the opposite direction, and while I disagree with Flew’s conclusions, I admire his intellectual honesty more than I do, for instance, Sean McDowell, the apologist son of an apologist who appears to simply be following in the family business. That said, I believe Flew’s lofty credentials do not counterbalance the faulty arguments and misinterpreted evidence that ultimately lead to his change of heart.